Missouri has a hybrid system for selecting judges, known as the Missouri Plan or Missouri Non-Partisan Court Plan. All Missouri judges are accountable to the voters, although their selection process varies.

Partisan elected judges run under a party label against challengers, unless no one chooses to oppose them. Voters elect their local judges during regular elections. Elected judges must run for reelection at the end of each term.

On the other hand, judges who serve under the Non-Partisan Court Plan do not run against challengers. Through the Non-Partisan Court Plan, nominating commissions made up of citizens, lawyers and a judge review applications, interview candidates and nominate three well-qualified individuals for the governor’s consideration – who has 60 days to select one of the nominees. The judges are selected based on their merits and must stand for retention before the voters after one year on the bench and the end of each term. This is the group of judges for which performance reviews are published on this website.

The Non-Partisan Court Plan governs selection and retention of judges in the Supreme Court of Missouri, the Missouri Court of Appeals, and six circuit courts (Clay, Jackson and Platte counties in the Kansas City area; both the county and city of St. Louis; and Greene County in the Springfield area). 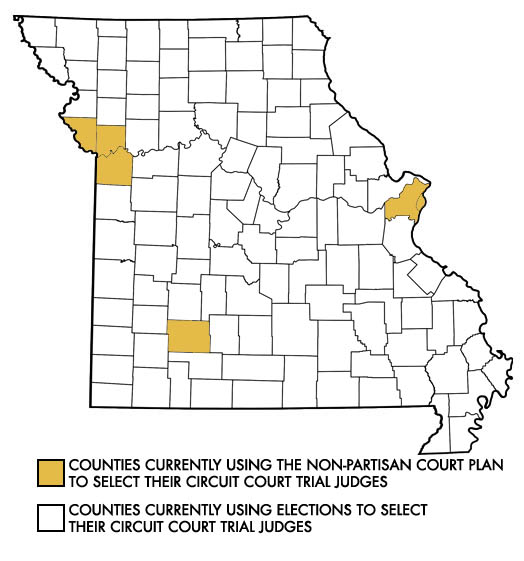 Types of Judicial Elections in Missouri

Non-Partisan Court Plan In the City of St. Louis, and in St. Louis, Jackson, Clay, Platte and Greene Counties, judges apply for their positions on the bench and are selected on the basis of merit. These nonpartisan judges run in retention elections after one year on the bench and the end of each of their terms. All of Missouri’s appellate judges are also selected under this system. Missouri’s Non-Partisan Court Plan has become a model for the nation. It continues to reduce the role of politics and money in the selection and election of judges. It also helps ensure the integrity of the judiciary by shielding candidates from undue pressure. Judges who serve under this plan have been nominated by a judicial commission and then selected by the governor. After their first 12 months in office, these appointed judges must go before the voters in a retention election. Voters are asked whether each of these judges should be retained. To be retained, each judge must receive a majority vote. A similar retention election occurs at the end of each term of office, under the same guidelines and provisions. If a judge does not receive a majority of votes, his or her judicial office will become vacant at the end of its present term. The judicial commission will then nominate three candidates for the position and the governor will appoint one to fill the vacancy. The terms for appellate court judges are 12 years. Among trial judges, circuit judges serve six-year terms, while associate circuit judges serve four-year terms. Two different types of commissions select nominees––appellate commissions and circuit commissions. In both commissions, the members’ terms are staggered. The appellate commission, which selects nominees to fill Supreme Court of Missouri or Court of Appeals openings, consists of a judge of the Supreme Court of Missouri, three lawyers and three non-lawyer members. The circuit commissions, which select nominees for trial-level openings, include the chief judge of the court of appeals district in which the vacancy occurs, two lawyers and two non-lawyer members. In both types of commissions, the lawyers are elected by bar members from their circuit or court of appeals district, and the non-lawyers are appointed by the governor.

Partisan Elections In many areas of Missouri, judges run for their seat on the bench as a Republican, Democrat or Independent. Most of Missouri’s state trial judges are elected this way. Most elections are between a Democrat and a Republican; while some judges run unopposed. Appellate judges and trial judges in St. Louis and the counties of St. Louis, Jackson, Clay, Platte and Greene are selected under Missouri’s Non-Partisan Court Plan. Vacancies during a term in a partisan seat may be filled by appointment by the governor until the next general election. Cities that have municipal courts determine the way that municipal judges are selected. Most run in elections. Circuit judges serve six-year terms; associate circuit judges serve four-year terms.