With the Nov. 8 general election rapidly approaching, a new group is taking a look into the qualifications of 49 judges who will be seeking retention on the bench under Missouri’s Non-Partisan Court Plan, commonly known as the Missouri Plan.

The new Judicial Performance Review Committee is the result of a June 15 order by the Supreme Court of Missouri revising Rules 10.50 – 10.55. As a result of these revisions, the previous judicial performance evaluation (JPE) program has undergone a significant change in structure and operations in its conversion to a judicial performance review (JPR) mechanism.

The Court’s action results in the replacement of the seven JPE committees around the state – one in each of the six trial circuits covered by the Missouri Plan, plus another committee for appellate judges – in favor of a single,  21-member statewide JPR Committee. Unlike the previous system, which asked the committees to make a recommendation regarding each judge seeking retention, the statewide committee will be tasked with determining if each judge meets overall judicial performance standards. This information will then be shared with the people of Missouri at  YourMissouriJudges.org and through other communications platforms prior to the election.

The Court’s order also requests the addition of a litigant/witness survey to the roster of tools used within the review process. This will not only serve as an additional source of public input regarding the qualifications of these judges, but will also give voters an even better look into the inner workings of a judge’s courtroom. The litigant/witness survey is expected to be implemented in time for the 2018 retention election cycle.

While this represents a major structural and operational shift, the Court’s action will bring Missouri in line with the majority of other states around the nation who conduct similar reviews. This is in keeping with the Missouri program’s ongoing desire to ensure that its judicial review process is consistent with current best practices.

The purpose of the judicial review process is to make sure that the people of Missouri have all of the information they need in order to cast an informed judicial ballot. This is the best possible way to ensure that Missouri continues to benefit from fair, impartial and skilled judges. The Court’s revamping of the review process facilitates this goal by expanding the voices of non-lawyers in the evaluation process, leaving the judging of judges to the voters, and fostering consistency by moving to one statewide review committee. 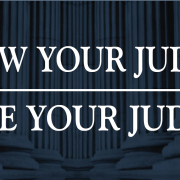 It’s a Wonderful Life: Celebrating a World with the Missouri Plan