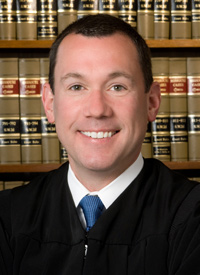 He is a member of the board of directors of the Missouri Institute of Justice, the Strategic Vision Committee of the Kansas City Metropolitan Bar Association, the Circuit Court Communications Committee and Employee Retention/Recognition Committee, and The Missouri Bar.

Judge Youngs is also a member of Visitation Catholic Church and a member of the board of directors of the Sherwood Center.

Attorneys who responded to survey questions rated Judge Youngs on a scale of 1 to 5, with 1 representing a response of “not at all,” and 5 representing “completely.” He received his highest scores for: is prepared for hearings and trials (4.56); demonstrates appropriate demeanor on bench (4.56); and maintains and requires order and decorum in the courtroom (4.52). He received his lower scores for: bases decisions on evidence and arguments (4.31); rulings on dispositive motions state reasons and consistently apply the substantive law (4.33); and not affected by partisan considerations (4.34). However, the committee notes that Judge Youngs’ lower scores were far above the average for retention.

The committee also reviewed juror responses to surveys and the comments were found to be 98.05 percent favorable. The committee noted comments such as, “Judge Youngs was extremely excellent and professional,” “Excellent job,” and “Very professional.”

The committee also reviewed a written order submitted by Judge Youngs which dealt with issues of substantive law applied to evidence, pleading and procedural matters often encountered by trial judges. The committee finds the order to be well reasoned and clearly written.