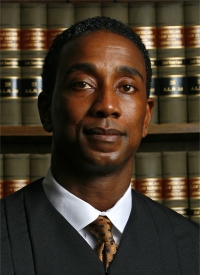 Judge Brian C. Wimes was appointed to the Jackson County Circuit Court in 2007. He received his undergraduate degree from the University of Kansas, and his law degree from the Thurgood Marshall School of Law at Texas Southern University.

Before his appointment to the Jackson County Circuit Court, he served as Drug Court Commissioner for the 16th Judicial Circuit. Judge Wimes also served as an assistant prosecuting attorney for Jackson County, and as an attorney advisor with the United States Department of Justice. He is a former member of the board of directors for Hope House Domestic Violence Shelter, and the Mental Health Association of the Heartland. He was also involved as a Big Brother for four years with Big Brothers/Big Sisters of Greater Kansas City.

Judge Wimes was evaluated by attorneys who appeared in court before him, and by jurors who served in trials over which he presided. Attorneys rated judges in 16 separate categories on a scale of 1 to 5, with 5 being the best rating. The attorney ratings for Judge Wimes included: 4.73 on maintaining and requiring proper order and decorum in the courtroom; 4.71 on demonstrating appropriate demeanor on the bench; 4.60 on treating people equally regardless of race, gender, ethnicity, economic status or any other factor; 4.12 on clarity of written orders and opinions; 4.17 on stating reasons and consistently applying the substantive law to rulings on dispositive motions; and 4.19 on competency in the law.