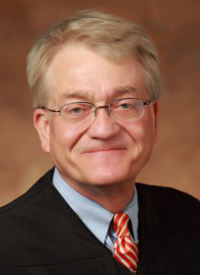 Judge Timothy J. Wilson was appointed as a circuit judge for the 22nd Judicial Circuit in 1989. He received both his undergraduate and law degrees from Saint Louis University.

Judge Wilson has served on the general trial docket of the 22nd Circuit Court, including all felonies and unlimited civil trials. Previously, he was the assistant United States Attorney for the Eastern District of Missouri. He is a member of The Missouri Bar and the Missouri State Judiciary. He is also affiliated with the America Eskimo Dog Rescue, Stray Rescue, St. Louis Partners for Paws, St. Joseph Indian School (Chamberlain South Dakota), and the Marlin Perkins Society – St. Louis Zoo.

The committee reviewed survey responses submitted by attorneys who had trials before Judge Wilson and rated Judge Wilson on a scale of 1 to 5, with 1 representing “Strongly Disagree” and 5 representing “Strongly Agree.” Lawyers who responded to survey questions gave Judge Wilson his highest scores for: allowing the appropriate amount of time for each case being prepared for court (4.34); making sure all parties understand the court proceedings (4.47); and addressing individuals respectfully in the courtroom (4.50). Judge Wilson’s lower scores were for: using courtroom time efficiently (4.00); applying rules of evidence relevant to the case (4.03); and starting courtroom proceedings on time (4.05).

The committee also reviewed written opinions by Judge Wilson. His opinions were well reasoned, with easy-to-follow explanations, competent in the law, and adhered closely to precedent as well as to constitutional and statutory law. The precedents were cited and clearly explained.

On March 27, 2014, the committee also observed Judge Wilson in the courtroom, where he was straightforward and to the point. Judge Wilson was handling a criminal docket, and his interaction with defendants and attorneys was efficient, professional, and direct.