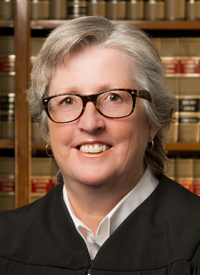 Judge Mary Weir was appointed as associate circuit judge to the 16th Judicial Circuit Court in May 2013. Judge Weir received her B.A. degree from the University of Missouri-Kansas City and her J.D. from Washburn University School of Law.

Judge Weir has also served as an adjunct professor at the University of Missouri-Kansas City School of Law. In addition to her professional affiliations and activities, Judge Weir is a member of the Jackson County Safe Families Coalition and the Independence Coordinated Community Counsel, and attends St. Francis Xavier Church.

Attorneys who responded to survey questions rated Judge Weir on a scale of 1 to 5, with 1 representing “Strongly Disagree” and 5 representing “Strongly Agree.” Her highest scores were for: starting courtroom proceedings on time (4.73); maintaining a professional demeanor in the courtroom (4.71); preparation for court (4.65); and addressing attorneys, court staff, litigants, witnesses and the public respectfully in the courtroom (4.65).

Even the lowest scores on the lawyer survey of Judge Weir were above average as she scored an average of: 4.31 for assisting parties in narrowing key issues in dispute; 4.38 for citing the applicable substantive law in her rulings; and 4.40 in rendering a prompt decision given the amount of case law required to make the decision. Her above average scores favor retention of Judge Weir.

Finally, the evaluators traveled to Judge Weir’s courtroom and observed her conducting a busy criminal docket. Judge Weir’s management of her docket was consistent with her high survey ratings. Her conduct in these proceedings was fair, efficient and courteous, and she was impressive in the way she kept things moving.