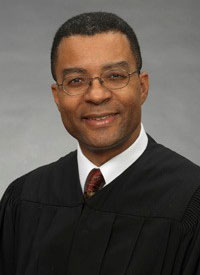 Judge David Lee Vincent, III was appointed to the 21st Circuit Court bench on November 14, 1997. He received a Bachelor of Science degree in electrical engineering from Tennessee State University and his law degree from the University of Wisconsin-Madison. He practiced law until his appointment to the bench, and served as an assistant circuit attorney from 1988 to 1993. Since his last retention election, Judge Vincent has presided over felony criminal and civil jury trials, equity matters, family court, and has sat on the Supreme Court Board of Court Reporter Examiners and the Judicial Finance Commission.Judge Vincent is a member of The Missouri Bar and served on the Board of Governors of The Missouri Bar (2008-2010). He is also a Missouri Bar continuing legal education presenter. He is likewise a member of the Bar Association of Metropolitan St. Louis, and participates as an attorney coach in BAMSL’s high school mock trial competition for Normandy and Marquette high schools. He is also a member of the Mound City Bar Association.He is a St. Louis internship program speaker/instructor, and active in the Rockwood School District Partners in Education program. He previously served as a board member for the St. Louis for Kids Non-Profit Organization (2000-2007), and is active in the Corporate Legal Diversity Pipeline Program, a partnership between the Association of Corporate Counsel and Street Law, Inc.

Attorneys were asked to rate each judge in 18 categories on a scale of 1 to 5, with 5 being the highest score. Some 276 attorneys responded as to Judge Vincent, whose scores ranged from 4.28 to 4.63. His highest scores were for: treating people equally regardless of race, gender, ethnicity, economic status, or any other factor; maintaining and requiring proper order and decorum in the courtroom; and demonstrating appropriate demeanor on the bench. His lowest scores on the attorney survey were for: ruling on dispositive motions state reason and consistently apply substantive law; effectively uses pre-trial procedure to narrow and define the issues; and is competent in the law.A peer survey of fellow St. Louis County judges rated Judge Vincent on the same 18 criteria as the lawyer survey. Judge Vincent had an average score of 4.05, with a range from 3.71 (clearly explains all oral decisions) to 4.33 (is prepared for hearings and trials).Five juror surveys were completed with respect to Judge Vincent. These surveys were answered “yes” or “no” with respect to five criteria. Judge Vincent received all positive responses to all criteria in all surveys received.The committee also reviewed three lengthy opinions submitted by Judge Vincent: a preemptory judgment and order from 2009 denying a defendant’s motion in limine pertaining to an evidentiary matter in a death penalty case; a 2010 court order and judgment pertaining to plaintiff’s motion for entry of declaratory judgment in school case regarding which school district was obligated to pay a child’s tuition; and a 2010 court order and judgment of modification in a family law case pertaining to one parent’s request to relocate a minor child. All three opinions included clear recitations of the facts and well-reasoned discussions of the law, with each ruling consistent with the case law cited in the opinions.