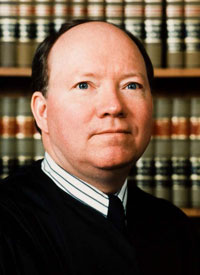 Judge Robert L. Trout was appointed associate circuit judge for the 16th Judicial Circuit in October 1987. He has been retained by the voters in each retention election since that time. He holds a Bachelor of Arts degree from William Jewell College. He received his law degree from the University of Missouri at Kansas City.Judge Trout is a former municipal judge for the City of Lone Jack, former chairman of the University of Missouri Extension Council in Jackson County, and a former member of the Missouri Public Defender Commission. He is also a member of The Missouri Bar and the Kansas City Metropolitan Bar Association.

Attorneys who responded to survey questions rated Judge Trout on a scale of 1 to 5, with 1 representing a response of “not at all” and 5 representing “completely.” He received his highest scores for: maintains and requires proper order and decorum in the courtroom (4.57); demonstrates appropriate demeanor on bench (4.49); treats people equally regardless of race, gender, ethnicity, economic status, or any other factor (4.41); and efficiently manages his/her docket (4.41). He received his lower scores for: effectively uses pretrial procedure to narrow and define issues (4.13); clearly explains all oral decisions (4.12); and gives reasons for rulings (4.09). However, the committee notes that Judge Trout’s lower scores were well above the average for retention. In addition, fellow judges rated Judge Trout at an aggregate score of “4.43″ in all respects.

Because Judge Trout does not conduct jury trials as a part of his position as associate circuit judge, no juror responses are available.

The committee also reviewed four written orders submitted by Judge Trout that dealt with issues of substantive law applied to evidence, pleading and procedural matters often encountered by trial judges. The committee finds the orders to be well-reasoned and clearly written.