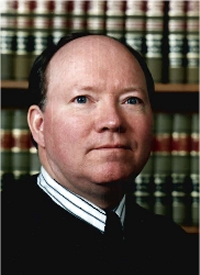 Judge Trout was appointed as an associate circuit judge of the Jackson County Circuit Court on October 5, 1987. He earned his undergraduate degree at William Jewell College and his law degree at the University of Missouri-Kansas City. Judge Trout was formerly a municipal judge in Lone Jack, and is a former member of the State Public Defender Commission.

Judge Trout was evaluated by attorneys who appeared in court before him. Attorneys rated judges in 16 separate categories on a scale of 1 to 5, with 5 being the best rating. The attorney ratings for Judge Trout included: 4.54 for treating people equally regardless of race, gender, ethnicity, economic status or any other factor; 4.59 for maintaining and requiring proper order and decorum in the courtroom; 4.57 for demonstrating appropriate demeanor on the bench; 4.47 for rulings on dispositive motions stating reasons and consistently applying the substantive law; 4.41 for giving reasons for rulings; and 4.38 for effectively using pretrial procedure to narrow and define the issues.