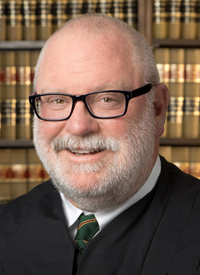 Judge John M. Torrence was appointed to the bench in August 2001. He earned his bachelor’s degree at Saint Louis University and his Juris Doctor at the University of Missouri-Kansas City. Judge Torrence is currently assigned as administrative judge over the Family Court Division. He is currently supporting three children in college.

Attorneys who responded to survey questions rated Judge Torrence on a scale of 1 to 5, with 1 representing a response of “Strongly Disagree” and 5 representing “Strongly Agree.” He received his highest scores for: addressing individuals (e.g., attorneys, court staff, litigants, public, witnesses) respectfully in the courtroom (4.51); treating the parties equally (4.47); and using courtroom time efficiently (4.41). He received his lower scores for: rulings cited the applicable substantive law (4.21); decisions followed logically from the evidence presented (4.16); and, assisting parties in narrowing key issues in dispute (4.12). It should be noted that Judge Torrence’s lower scores are well above the level supporting retention.