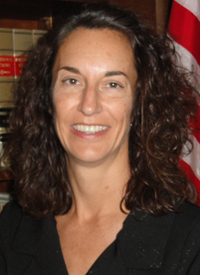 Judge Janet Sutton was appointed associate circuit judge in 2003. She was appointed to the circuit judge in 2013. She received both her Bachelor of Arts in communication studies and her Juris Doctorate degree at the University of Missouri-Kansas City School of Law.  She acted as assistant prosecutor for Clay County from 1990 to 2003 and was the chief assistant prosecutor for the years 2000 to 2003. She was a municipal prosecutor and later a municipal judge for the City of Excelsior Springs, as well as legal counsel to the Clay County Sheriff’s Office, before becoming a judge.

She has worked as a member of the Community Response Team for Synergy Services.

In responding to the 19 questions about Judge Sutton, the lawyers surveyed provided high scores for addressing individuals respectfully in the courtroom (4.63); maintaining a professional demeanor in the courtroom (4.65); treating the parties equally (4.53); conducting the proceedings in a neutral manner (4.53); and carefully considering arguments from both sides before ruling (4.49).

Judge Sutton’s lower scores were for starting court room proceedings on time (4.44); applying the rules of evidence relevant to the case (4.42); giving reasons for a ruling when needed (4.29); entering a decision that follows logically from the evidence presented (4.27); having the judge’s ruling cite the applicable substantive law (4.27); and assisting parties in narrowing key issues in dispute (4.04).

The committee also received survey responses from jurors who had participated in a jury trial before Judge Sutton. The committee reviewed the answers given by the jurors and found that they provided positive responses to the 10 questions asked, with one juror not answering four of the questions either positively or negatively.

The committee received and reviewed three written opinions authored by Judge Sutton.  The Committee found the opinions to be clear, concise and well written.