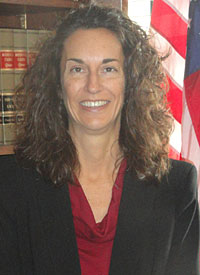 Judge Janet Sutton was appointed associate circuit judge for the 7th Judicial Circuit in 2003. She received her Bachelor of Arts degree in communication studies at the University of Missouri-Kansas City and her Juris Doctorate degree at the University of Missouri-Kansas City School of Law. She acted as assistant prosecutor for Clay County from 1990 to 2003 and was the chief assistant prosecutor from the years 2000 to 2003. She was a municipal prosecutor for Excelsior Springs and a municipal judge for Excelsior Springs, as well as legal counsel to the Clay County Sheriff’s Office, before becoming a judge.Judge Sutton is a member of The Missouri Bar and Clay County Bar Association. She is also a member of the Association of Women Lawyers of Kansas City, the Missouri Associate and Probate Judges Association, and the Missouri Municipal and Associate Judges Association. She has worked as a member of the Community Response Team for Synergy Services. She was retained as a judge in the elections for the years 2004 and 2008.

Attorneys who responded to survey questions asking if they agreed with 18 statements about Judge Sutton rated Judge Sutton on a scale of 1 to 5, with 1 representing “not at all” and 5 representing “completely.” Judge Sutton received her high scores for treating people equally regardless of race, gender, ethnicity, economic status or any other factor (4.72); being prepared for hearings and trials (4.68); maintaining and requiring proper order and decorum in the courtroom (4.67); not being affected by partisan considerations (4.67); allowing parties latitude to present their arguments (4.66); and efficiently managing her docket (4.66).Judge Sutton’s lower scores were for giving reasons for her rulings (4.48); showing and understanding of rules of procedure and evidence (4.47); weighing all evidence fairly and impartially before rendering a decision (4.47); clearly explaining all oral decisions (4.48); and effectively using pretrial procedure to narrow and define the issues (4.38).The committee did not receive any survey responses from jurors who had participated in jury trials before Judge Sutton. Judge Sutton’s docket is made up almost entirely of non-jury matters and, therefore, she rarely has occasion to have a jury trial which accounts for the absence of any juror survey responses.The committee received a peer survey submitted by the other judges of the 7th Judicial Circuit. In the review provided by three respondents of the 7th Judicial Circuit, Judge Sutton received a perfect score of 5.00 on all issues presented to her peers. The questions asked of the peer reviewers are the same as those asked of the lawyers practicing before Judge Sutton.The committee received and reviewed three written opinions authored by Judge Sutton. The committee found the opinions to be clear, concise and well-written. The committee did observe Judge Sutton as she conducted public hearings. The observations of Judge Sutton by the committee members were taken into account in the making of the recommendations set out below. The committee also met with Judge Sutton and had the opportunity to interview her on May 24, 2012. The comments made by the judge and the answers made by the judge to questions posed to her by the committee were taken into account in the recommendations set out below.