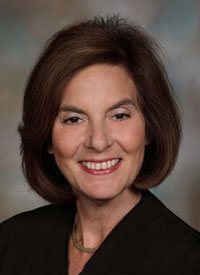 Judge Sherri B. Sullivan was appointed to the Missouri Court of Appeals in 1999. She earned her Bachelor of Science degree in administration of justice from the University of Missouri-St. Louis and received her law degree from St. Louis University.Before her appointment to the Court of Appeals for the Eastern District of Missouri, Judge Sullivan served as a circuit judge in the 22nd Judicial Circuit (St. Louis City) from 1994-1999, and as an associate circuit judge from 1989-1994. Prior to her appointment to the bench, she was an assistant prosecuting attorney for the St. Louis Circuit Attorney’s Office. Judge Sullivan’s community involvement includes volunteering in various capacities for St. Gabriel the Archangel Church and being a member of the St. Louis Forum for female executives and professionals.Her activities in the legal community include membership in the Women Lawyers Association of St. Louis, the National Association of Women Judges, the Bar Association of Metropolitan St. Louis, and the American Bar Association. As a judge, she serves as the chair of the Public Information Committee, and has reinstituted a speaker’s bureau for judges to speak to community groups about the judicial system.

On The Missouri Bar’s 2012 Appellate Court Evaluation Survey, attorneys who responded to survey questions rated Judge Sullivan on a scale of 1 to 5 on 10 different and positive judicial qualities, with 1 representing “not at all” and 5 representing “completely.” Her highest scores were for being courteous toward attorneys (4.47), issuing timely opinions (4.37), and treating parties equally regardless of race, sex or economic status (4.36). Judge Sullivan was not rated below a 4.00 in any category. The committee also reviewed opinions written by Judge Sullivan. Those opinions appeared to be in accordance with constitutional and statutory law. They were written in a straightforward fashion, and appeared to be consistent with precedent and statutes.