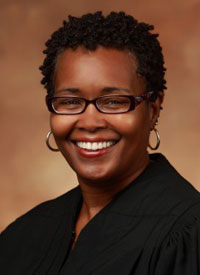 Judge Calea Stovall-Reid was appointed as associate circuit judge of the 22nd Judicial Circuit in March 2003, and retained by voters in 2004 and 2008. She is a graduate of Howard University in Washington, D.C., with a Bachelor Arts degree in 1982 and a juris doctor from Washington University School of Law in 1990. She was corporate counsel to the St. Louis Housing Authority in 1997-2003, a litigation associate with the law firm of Peoples & Hale from 1995 to 1997, an assistant circuit attorney for the Circuit Attorney’s Office for the City of St. Louis from 1993 to 1995, and an assistant public defender with the Missouri State Public Defender’s Office in the City of St. Louis Litigation Office from 1991 to 1993.Judge Stovall-Reid is currently assigned to the civil non-jury trial division, predominately presiding over motions and non-jury trials involving debtor-creditor issues, small claims, contract disputes, landlord-tenant and Department of Revenue trial de novo matters.Judge Stovall-Reid is an adjunct instructor for St. Louis Community College, is a member of the Mound City Bar Association, and is a volunteer truancy court judge (St. Louis Public Schools – St. Louis City Juvenile Courts, currently assigned to the Ashland School). She serves on the board of advisors for South City YMCA, the board of trustees for Crossroads College Preparatory School, and the Gala Committee for Crossroads College Preparatory School. Judge Stovall-Reid is a member of the Imani A.M.E. Church and is a volunteer child care provider for Almost Home transitional home for teen mothers and their children.

Attorneys who responded to survey questions rated Judge Stovall-Reid on a scale of 1-5, with 1 representing “not at all” and 5 representing “completely.” She received her highest scores for: maintaining and requiring proper order and decorum in the courtroom (3.79); issuing timely opinions and decisions (3.71); and allowing parties latitude to present their arguments (3.65). Judge Stovall-Reid’s lowest scores were for: understanding rules of procedure and evidence (3.34); weighing all evidence fairly and impartially before rendering a decision (3.33); and being competent in the law (3.27).

Judge Stovall-Reid’s peers also completed a survey with questions identical to those on the attorney survey. The peer review surveys yielded an overall average score of 4.12.

No juror surveys were submitted for Judge Stovall-Reid, as she served in non-jury divisions.

The committee also reviewed writing samples prepared by Judge Stovall-Reid that dealt with numerous issues of constitutional law and found that the opinions were well reasoned, clearly written and faithful to the case precedents ruling on the Missouri constitution and state statutes.

Members of the committee also observed Judge Stovall-Reid in a courtroom setting and found her to exhibit patience, respect for parties and attorneys, thoughtfulness and efficiency.