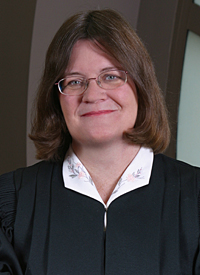 Judge Stith received the Joseph Stevens Aspire to Excellence Award from the Kansas City Metropolitan Association in 2009 and the Distinguished Non-Alumnus Award from the University of Missouri-Columbia School of Law in 2006.  She is the founding director of Lawyers Encouraging Academic Performance (LEAP), an inter-bar lawyers’ public service organization in Kansas City and is also a mentor and tutor to young students at St. Vincent’s Operation Breakthrough in Kansas City.

Attorneys who responded to survey questions rated Judge Stith on a scale from 1 to 5, with 1 representing “Strongly Disagree” and 5 representing “Strongly Agree.” Judge Stith received her highest marks for: punctuality (4.44); attentiveness to the arguments of all parties during oral argument (4.43); and attentiveness to the differing opinions of colleagues during oral argument (4.21). Responders described Judge Stith as intelligent, committed and fair.