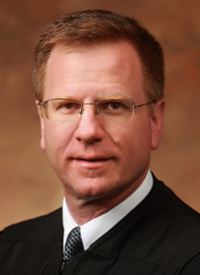 Judge Michael F. Stelzer was appointed as a circuit judge for the 22nd Judicial Circuit in 2012. He graduated from Augustana College and received his law degree from Saint Louis University.

Judge Stelzer has served in the Family Court as well as handling general trials in the 22nd.

Previously, he was an assistant city counselor and a member of the general counsel of the St. Louis Metropolitan Police Department.  He is a member of the Lawyers Association of St. Louis. He is also affiliated with the Boy Scouts of America, Augustana College Alumni Board of Directors, and St. Gabriel Catholic Church.

The committee reviewed survey responses submitted by attorneys who had trials before Judge Stelzer and rated him on a scale of 1 to 5, with 1 representing “Strongly Disagree” and 5 representing “Strongly Agree.” Lawyers who responded to survey questions gave Judge Stelzer his highest scores for: being prepared for court (4.24); being prompt in rendering a decision (4.26); and for allowing the appropriate amount of time for each case (4.28). Judge Stelzer’s lower scores were for: assisting parties in narrowing key issues in disputes (3.79); addressing individuals respectfully in the courtroom (3.84); and for conducting proceeding in a neutral manner (3.86).

Judge Stelzer did not have any jury trials during the preceding two calendar years.

The committee also reviewed opinions written by Judge Stelzer. His opinions were well-reasoned, with easy-to-follow explanations, competent in the law, and adhered closely to precedent as well as to constitutional and statutory law. The precedents were cited and clearly explained.

On March 27, 2014, the committee also observed Judge Stelzer in the courtroom, where he was professional, straightforward, to the point, and helpful to all parties present in the courtroom. Judge Stelzer was handling a civil docket and hearing arguments on a motion in a domestic case. His interaction with the attorneys was professional. He was attentive and engaged, asking questions of the attorneys in a thoughtful manner.