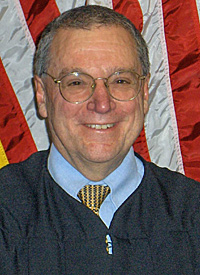 Judge Smith was appointed as an associate circuit judge for the 21st Judicial Circuit in November 1995. He graduated from Washington University with a Bachelor of Science degree and received his law degree from Duke University. He was the mayor of Ellisville and also previously served as a family court commissioner.

Judge Smith was appointed to the Missouri Supreme Court Committee on Access to Family Courts and is a member of the St. Louis County Bar Association and the Bar Association of Metropolitan St. Louis. Judge Smith has been proactive in establishing specialty pro se and parenting courts in St. Louis County. In addition, he has presented at many continuing legal education programs for lawyers, judges and court personnel.

He received his highest scores for being prepared for hearings and trials (3.87), efficiently managing his docket (3.86), and being competent in the law (3.80). Judge Smith’s lower scores were for demonstrating appropriate demeanor on the bench (3.31);, allowing parties latitude to present their arguments (3.24), and weighing evidence fairly and impartially (3.20).

The committee also reviewed a “Judgment of Modification of Decree of Dissolution” written by Judge Smith and found the ruling was well-written, concise, and consistent with Missouri case law and statutes.

No jury responses were reviewed as Judge Smith does not preside over jury trials as a Family Court judge.