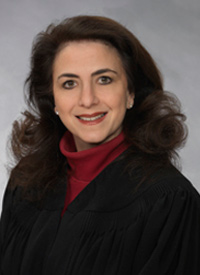 Judge Siwak was appointed as a circuit judge on February 4, 2008. Judge Siwak previously served as an associate circuit judge from 2002-2008 and as a Family Court commissioner from 1999-2002. Her judicial assignments since the last retention election have included civil and equity jury trials, criminal matters and Family Court. She is on the Statewide Court Committees, and is a faculty member of the Missouri State Judicial College and Judicial Orientation.

Attorneys were asked to rate each judge on a scale of 1 to 5, with 5 being the highest score. More than 350 attorneys responded with respect to Judge Siwak. The lowest score on any category Judge Siwak received was 4.08 (efficiently manages her docket; issues timely opinions/decisions). The attorneys rated Judge Siwak as 4.20 or higher in eight of 18 categories. Her highest scores included treating people equally (4.36) and maintaining and requiring proper order and decorum in the courtroom (4.39).

No jury responses were reviewed, as Judge Siwak did not preside over jury trials due to her last assignment as a Family Court judge.

The Committee also reviewed a “Findings of Facts, Conclusions of Law, and Judgment” written by Judge Siwak and found the ruling to be well-reasoned, concise and consistent with the case law cited therein.