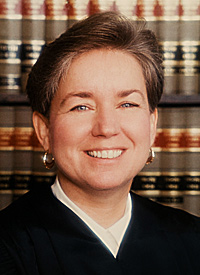 Judge Sill-Rogers was appointed to the Jackson County Circuit Court (16th Judicial Circuit) in September 1993. She obtained a Bachelor of Arts degree in administration of justice from the University of Missouri-Kansas City. She obtained her law degree from George Washington University National Law Center. Her judicial assignment since her last retention election has been handling a domestic docket in Family Court.

She is a member of The Missouri Bar, the Kansas City Metropolitan Bar Association, and the Association of Woman Lawyers of Greater Kansas City.

She serves as a member of the board and president of Operation Breakthrough, Inc., vice president of Lawyers Encouraging Academic Performance, a Core Team Leader of the Jackson County Safe Family Coalition, and serves on the board of the Kansas City Youth Court. In 2007, she received the Kansas City Metropolitan Bar Foundation award for community service. Additionally, she received an award from the Daily Record in 2006 as a Legal Leader of the Year.

Attorneys who responded to survey questions rated Judge Sill-Rogers on a scale of 1 to 5, with 1 representing a response of “not at all” and 5 representing “completely.”

She received her highest scores for maintaining and requiring proper order and decorum in the courtroom (4.25) and understanding rules of procedure and evidence (4.16). Judge Sill-Rogers’ lower scores were for displaying fairness and impartiality toward each side of the case (3.55) and weighing all evidence fairly and impartially before rendering a decision (3.61). However, the committee notes that Judge Sill-Rogers’ lower scores were far above the average for retention.

The committee did not review jury responses to surveys, due to the fact that Judge Sill-Rogers’ assignment in family court does not include jury trials.

The committee has reviewed a written opinion submitted by Judge Sill-Rogers that dealt with complex dissolution of marriage. The committee found the judgment to be well reasoned, clearly written, and following Missouri case precedent.