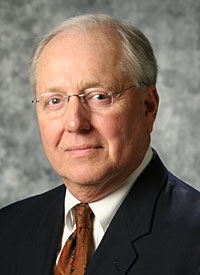 Before his appointment to the court, Judge Shafer spent many years in the private practice of law. He also served one term as prosecuting attorney of Platte County. He is a member of The Missouri Bar, the American Bar Association, and the Platte County Bar Association. His community interests include the Weston Christian Church and the Weston Historical Museum.

Attorneys who responded to survey questions rated Judge Shafer on a scale of 1 to 5, with 1 representing “not at all” and 5 representing “completely.” Judge Shafer received a rating above 4.0 in all categories, which is an indication that the attorneys have substantial respect for the judge’s skill and professionalism.

Judge Shafer received his highest scores for maintaining and requiring proper order and decorum in the courtroom (4.54), efficiently managing his docket (4.44), demonstrating appropriate demeanor on the bench (4.38), being competent in the law (4.38) and effectively using pretrial procedure to narrow and define the issues (4.38). Judge Shafer’s lower scores were for giving reasons for his rulings (4.11), clearly explaining all oral decisions (4.14), basing decisions on evidence and arguments (4.16), and weighing all evidence fairly and impartially before rendering a decision (4.21).

The committee reviewed survey responses submitted by Judge Shafer’s peers. He received his highest scores for being competent in the law, understanding the rules and procedure of evidence, basing his decisions on evidence and arguments, being prepared for hearings and trials, being fair and impartial toward each side of the case, and not being affected by partisan considerations.

The committee also reviewed survey responses submitted by jurors who were seated in jury trials before Judge Shafer. Jurors who responded to survey questions gave Judge Shafer a perfect rating in all categories, including acting with patience and dignity, clearly explaining court procedure, legal issues and the responsibilities of the jury, maintaining control over the courtroom, and being well-prepared for the case.

The Committee has also reviewed three written opinions submitted by Judge Shafer that dealt with criminal and civil issues and found that the opinions appear to be well-reasoned and clearly written, and they appear to fulfill all of the necessary legal requirements.