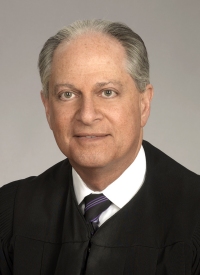 Judge Seigel was appointed to the St. Louis County Circuit Court in August, 1994. Before he took the bench, he was in private practice. He received his undergraduate degree in journalism from the University of Missouri-Columbia, and his law degree from Washington University. He is a member of The Missouri Bar and Lawyer’s Association of St. Louis. He is also a member of the Supreme Court Judicial Records Committee.

Judge Seigel is married and has two sons. He is a former member of the board of Jewish Family and Children Services, and a former board member of congregation Shaare Emeth.

Attorneys who responded to survey questions consistently gave Judge Seigel better than average marks. Among his highest scores were for: being prepared for hearings and trials; understanding rules of procedure and evidence; and maintaining and requiring proper order and decorum in the courtroom. Among his lowest scores on the attorney survey were: displaying fairness and impartiality toward each side of the case (4.10) and weighing all evidence fairly and impartially before rendering a decision (4.14).

On juror ballots, Judge Seigel scored highly on all questions.

The committee also considered an Order and Judgment entered by Judge Seigel this year which was well reasoned, succinct and consistent with prior case precedents cited in his order.

The committee also reviewed a written opinion of Judge Seigel which was clear, concise, well written, and consistent with the applicable law cited therein.