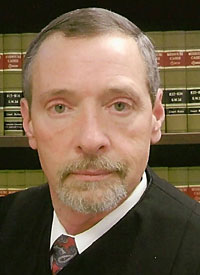 Judge Vernon E. Scoville, III was appointed an associate circuit judge for the 16th Judicial Circuit in 1991 and has been retained by voters in each election since. He received his undergraduate degree as well as his law degree from the University of Missouri-Kansas City in 1976 and 1978 respectively.Judge Scoville is a past president of the Missouri Association of Probate and Associate Circuit Judges as well as being a member of the Kansas City Metropolitan Bar Association and the Eastern Jackson County Bar Association. He is a member of St. John LaLande Church, is an adjunct professor at Park University, and is a major in the US Army Reserves-Military Police, retired.

Attorneys who responded to survey questions rated Judge Scoville on a scale of 1 to 5, with 1 representing “not at all” and 5 representing “completely.” He received his highest scores for: treating people equally regardless of race, gender, ethnicity, economic status or any other factor (4.17); and allows parties latitude to present their arguments (4.11). Judge Scoville’s lower scores were for: demonstrating appropriate demeanor on the bench (3.62); and bases decisions on evidence and arguments (3.79). Judge Scoville’s low scores are above the average for retention.The committee also reviewed a peer survey completed by a number of Judge Scoville’s peer/judges. Again, the survey rated Judge Scoville on a scale of 1 to 5. He received the highest scores from his peers for: gives reasons for rulings (4.0), and clearly explains all oral decisions (4.0). Judge Scoville’s lower scores were for: maintains proper decorum in the courtroom (3.55), and is not affected by partisan considerations (3.55). The committee has reviewed a written opinion submitted by Judge Scoville that dealt with numerous issues. The committee finds the opinion to be well-reasoned and clearly written.The committee observed Judge Scoville performing his functions on the bench and found him to be efficient. The committee found his demeanor toward litigants, attorneys and staff to be professional and appropriate.