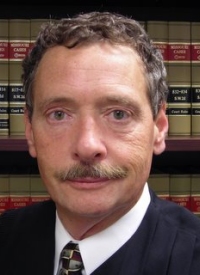 Judge Scoville was appointed as an associate circuit judge of the Jackson County Circuit Court (16th Judicial Circuit) in 1991. He graduated from the University of Missouri-Kansas City with a bachelor’s degree in 1976 and a law degree in 1978. He also earned a Licensed Practical Nurse certificate from the Metropolitan Community College in 2006.

Before his appointment to the court, Judge Scoville was an assistant prosecuting attorney in Jackson County and a Missouri State Representative. Judge Scoville has also served in a number of professional organizations, including president of the Missouri Association of Probate and Associate Circuit Judges, Editorial Board of the Journal of The Missouri Bar, Kansas City Metropolitan Bar Association, Legislative Steering Committee, Missouri Judicial Conference, and the Eastern Jackson County Bar Association. His other interests include serving as a major in the U.S. Army Reserves, senior adjunct professor at Park University and member of the Missouri Association of Licensed Practical Nurses. He is a member of the St. John La Lande Catholic Church, and is a widower with two children.

Judge Scoville was evaluated by attorneys who appeared in court before him. Attorneys rated judges in 16 separate categories on a scale of 1 to 5, with 5 being the best rating. The attorney ratings for Judge Scoville included: 4.12 for treating people equally; 4.04 for allowing parties latitude to present their arguments; 3.99 for understanding the rules of procedure and evidence; 3.77 for basing decisions on evidence and arguments; 3.76 for rulings on dispositive motions that state reasons and consistently apply the substantive law; and 3.55 for demonstrating appropriate demeanor on the bench.