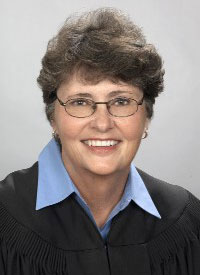 Judge Mary Bruntrager Schroeder was appointed an associate circuit judge for the 21st Judicial Circuit on May 11, 1999. Previously, she was a circuit attorney for the City of St. Louis from 1980 until 1982. She engaged in the private practice of law from 1983 until 1999.Judge Schroeder graduated with a Bachelor of Arts degree in history from St. Louis University and received her juris doctorate from St. Mary’s University in San Antonio, Texas.She is a member of The Missouri Bar, the Bar Association of Metropolitan St. Louis, St. Louis County Bar Association, Women Lawyers Association, and the Association of Associate Circuit and Probate Judges. In addition to her duties as an associate circuit judge, she is involved with the St. Louis County Truancy Court program in the Valley Park School District.

Attorneys were asked to rate each judge on a scale of one to five, with five being the highest score. Approximately 200 attorneys responded with respect to Judge Schroeder. Her highest scores were for: issuing timely opinions/decisions (3.76); and efficiently managing her docket (3.75). Her lowest score was 3.27 for demonstrating appropriate demeanor on the bench.A peer survey of fellow St. Louis County judges gave Judge Schroeder an average score of 4.08.The committee reviewed several judgments/memorandum opinions written by Judge Schroeder. All of the judgments/memorandum opinions were well reasoned, well written, and consistent with the case law cited.The committee also reviewed a written opinion of Judge Schroeder that was clear and concise, well written and consistent with the applicable case law cited therein.