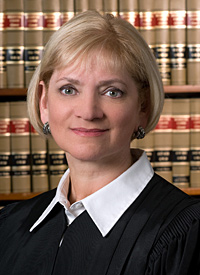 Judge Sauer is a board member of the Lyric Opera Guild (2001-2010) and a member and volunteer at the United Methodist Church of the Resurrection.

Attorneys who responded to survey questions rated Judge Sauer on a scale of 1 to 5, with 1 representing a response of “not at all,”,and 5 representing “completely.”

She received her highest scores for: maintaining and requiring proper order and decorum in the courtroom (4.28); and treating people equally regardless of race, gender, ethnicity, economic status, or any other factor (4.20). Judge Sauer’s lower scores were for: rulings on dispositive motions that state reasons and consistently apply the substantive law (3.73); and, competency in the law (3.85). However, the committee notes that Judge Sauer’s lower scores were far above the average for retention.

The committee did not review juror responses to surveys, as associate circuit judges do not regularly conduct jury trials.

The committee reviewed a written order submitted by Judge Sauer which dealt with issues of pleading and procedure. The committee finds the order to be well reasoned, succinct and clearly written.