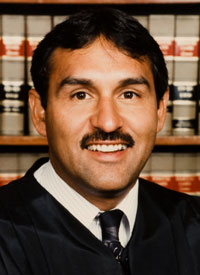 Judge Marco A. Roldan was appointed circuit judge for the 16th Judicial Circuit in 1999. Prior to his appointment, he served as Drug Court Commissioner for the 16th Circuit. Judge Roldan received his Bachelor of Science degrees from the University of Central Missouri in criminal justice administration and Spanish. He then received his law degree from the University of Missouri-Kansas City.Judge Roldan is a member of The Missouri Bar, the Eastern Jackson County Bar Association, the Kansas City Metropolitan Bar Association, and the Hispanic Bar Association. He is a member of the Summit Woods Baptist Church, where he serves as moderator and member of the personnel committee. He is also active with the Friends of the Medical School for the University of Missouri-Kansas City.

Attorneys who responded to survey questions rated Judge Roldan on a scale of 1 to 5, with 1 representing “not at all” and 5 representing “completely.”Judge Roldan received his highest scores for: maintains and requires proper order and decorum in the courtroom (4.67); and demonstrates proper demeanor on the bench (4.66). His lower scores were for: rulings on dispositive motions state reasons and consistently apply the substantive law (4.34); and effectively uses pretrial procedure to narrow and define the issues (4.38). Judge Roldan’s lower scores are well above the average for retention.The committee reviewed a peer survey completed by a number of Judge Roldan’s fellow judges. Again, the survey rated Judge Roldan in several categories, on a scale of 1 to 5. He received the highest scores for: treats people equally regardless of race, gender, ethnicity, economic status, or any other factor (4.67); displays fairness and impartiality toward each side of the case (4.67); is not affected by partisan considerations (4.67); demonstrates appropriate demeanor on the bench (4.67); and maintains and requires proper order and decorum in the courtroom (4.67). Judge Roldan’s lower score was for: is competent in the law (4.5). The committee has reviewed written opinions submitted by Judge Roldan, and finds them to be written with clarity and reason.