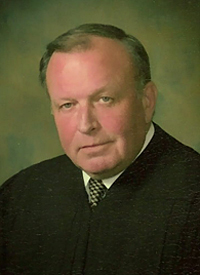 Judge Riley has served on the general trial docket of the 22nd Circuit Court, including all felonies and unlimited civil trials. Previously, he was the municipal judge for the City of Black Jack. He is a member of The Missouri Bar, the Bar Association of Metropolitan St. Louis and the Reserve Officers Association. He is also affiliated with the St. Margaret of Scotland Catholic Church, the Shaw Neighborhood Improvement Association, and a former member of the Truman-Koch Welfare Association.

The committee reviewed survey responses submitted by attorneys who had trials before Judge Riley and rated Judge Riley on a scale of 1 to 5, with 1 representing “Strongly Disagree” and 5 representing “Strongly Agree.” Lawyers who responded to survey questions gave Judge Riley his highest scores for: addressing individuals respectfully in the courtroom (4.66); applying the rules of evidence relevant to the case (4.64); maintaining a professional demeanor in the courtroom (4.63); and being prepared for court (4.63). Judge Riley’s lower scores were for:  assisting parties in narrowing the key issues in dispute (4.52); issuing an order that was clearly written (4.52); and using courtroom time efficiently (4.52).

Jurors who served on trials that went before Judge Riley evaluated by him by answering ten “yes” or “no” answers about his manner in the trial. All of the jurors agreed that Judge Riley clearly explained their responsibilities to them, maintained control of the courtroom, acted in a dignified manner, clearly explained the legal issues of the case, promoted public confidence in the courts, and clearly explained court proceedings.  Judge Riley’s scores never dropped below 98% affirmative, with his lower scores coming in response to these questions: did the judge act with patience (98.2%); did the judge treat people equally regardless of race, gender, ethnicity, economic status, or any other factor (98.2%); did the judge appear to be free from bias (98.2%) and did the judge appear to be well-prepared for the case. (98.2%)

The committee also reviewed written opinions by Judge Riley. His opinions were well reasoned, with easy to follow explanations, competent in the law, and adhered closely to precedent as well as to constitutional and statutory law.  The precedents were cited and clearly explained.

On June 19, 2014, the committee observed Judge Riley in the courtroom, where he was straightforward and to the point. Judge Riley was handling a criminal docket, and his interaction with defendants and attorneys was efficient, professional, and direct.