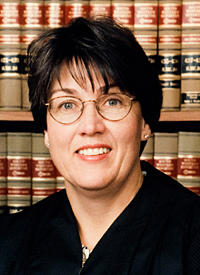 Judge Rigby was appointed an associate circuit judge for the 16th Judicial Court in 1997 and has been subsequently retained by voters in 1998, 2002 and 2006. She received a Bachelor of Science in education from Missouri State University and a law degree from the University of Missouri in Kansas City in 1987.

Judge Sauer is a board member of the Lyric Opera Guild (2001-2010) and a member and volunteer at the United Methodist Church of the Resurrection.

Attorneys who responded to survey questions rated Judge Rigby on a scale of 1 to 5, with 1 representing “not at all” and 5 representing “completely.”

She received her highest scores for: treating people equally regardless of race, gender, ethnicity, economic status or any other factor (4.6); not being affected by partisan considerations (4.53); and demonstrating appropriate demeanor on the bench, and maintaining and requiring proper order and decorum in the courtroom, and displaying fairness and impartiality toward each side of the case (4.50). Judge Rigby’s lower scores were for: rulings on dispositive motions state reasons and consistently apply the substantive law, effectively using pretrial procedure and evidence and effectively using pretrial procedure to narrow and define the issues (4.13); and is competent in the law (4.19). However, the committee notes that Judge Rigby’s lower scores were far above the average for retention.

The committee observed Judge Rigby performing her functions on the bench and found her to be efficient. The committee found her demeanor toward litigants, attorneys and staff to be professional and appropriate.