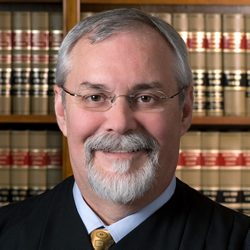 Judge Standridge is also a member of the Kansas City Metropolitan Bar Association and The Missouri Bar.