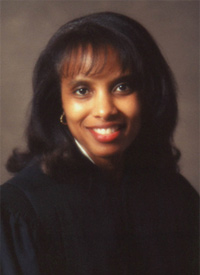 Judge Quigless has served as a trial de novo attorney for the Missouri Department of Revenue, an assistant general counselor for the Missouri Public Service Commission, assistant circuit attorney and city counselor for the city of St. Louis. She has also served as the Assistant U.S. Attorney for the Eastern District, and as Special Missouri Supreme Court Judge.

She currently is a member of the court’s Operational Support Committee, Jury Supervision Committee, and Rules Committee. She also is a mentor for new women lawyers in the Women’s Lawyers Association. Judge Quigless is involved in the Gateway Autism Society, a board member in Metropolitan St. Louis Autism Coalition, an advisory board and former board member of the Sherwood Forest Camp, as well as a faculty affiliate in the Sue Shear Institute for Women in Public Life.

Attorneys who responded to survey questions rated Judge Quigless on a scale of 1 to 5, with 1 representing “not at all” and 5 representing “completely.” She received her highest scores for: treating people equally regardless of their race, gender, ethnicity, economic status, or any other factor (3.86); for maintaining and requiring proper order and decorum in her courtroom (3.84); demonstrating appropriate demeanor on the bench (3.69); and for not being affected by partisan considerations (3.69). Judge Quigless’s lower scores were for: being competent in the law (3.17); for her understanding of the rules of procedure and evidence (3.29); for rulings on dispositive motions stating reasons and consistently applying the substantive law (3.33); and for basing decisions on evidence and arguments (3.38).

The committee also reviewed survey responses submitted by jurors who were seated in jury trials before Judge Quigless. Judge Quigless never received an approval rating below 98 percent on any of the 10 categories on which she was rated regarding her conduct throughout the jury trials.

The committee also reviewed written opinions from Judge Quigless. Her opinions were well-reasoned, with easy to follow explanations, competent in the law, and adhered closely to precedent as well as to constitutional and statutory law.