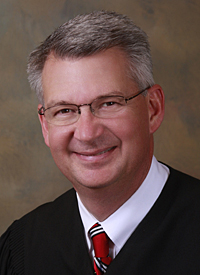 He serves on the Circuit Court Budget Committee of the Supreme Court of Missouri and has also served on the Judicial Time Standards Committee for the Missouri courts. While serving as an associate circuit judge, he established the Truancy Court Program for the Springfield Public Schools.

Judge Powell is a graduate and former two-time board member of Leadership Springfield and has also served on the board of directors for the Springfield Boys and Girls Club, Court Appointed Special Advocates (CASA) of Southwest Missouri, and Community Partnership of the Ozarks.

Attorneys who responded to survey questions rated Judge Powell on a scale of 1-5 with a 1 representing “Strongly Disagree” and 5 representing “Strongly Agree.” He received his highest scores for: being prompt in rendering a decision (4.40); being prepared for court (4.40); starting on time (4.36); and using courtroom time efficiently (4.27). Judge Powell’s other scores included: addressing individuals respectfully in the courtroom (3.64); maintaining a professional demeanor in the courtroom (3.72); and conducting the proceeding in a neutral manner (3.96).

Juror survey responses were submitted by jurors who served in trials before Judge Powell. Judge Powell received unanimously favorable responses from all jurors on questions relating to ten separate criteria related to his conduct throughout the jury trials.

The committee also reviewed survey responses submitted by Judge Powell’s staff that dealt with positive and negative experiences with the judge, court demeanor, treatment of involved parties and administration. This information was considered in this evaluation.

Judge Powell was also personally observed in court on May 19, 2014. Judge Powell was observed to be polite, respectful, courteous and efficient. He used light humor when appropriate and was respectful of both the lawyers and persons appearing before him. The committee also reviewed written findings of fact and conclusions of law submitted by Judge Powell from a court-tried case.