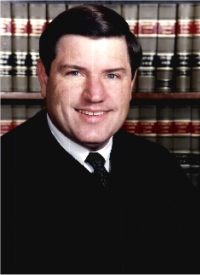 Judge John R. O’Malley was appointed to the Jackson County Circuit Court in 1989. He received his undergraduate and law degrees from St. Louis University.

Before his appointment to the Jackson County Circuit Court, Judge O’Malley served as a prosecuting attorney in Grandview, and assistant city counsel for the City of St. Louis. Judge O’Malley presently serves on the Mayor’s Task Force on Race Relations, and is a member of the board of directors of the Black Archives of Mid-America. He is also a member of the U.S. Army Reserve.

Judge O’Malley was evaluated by attorneys who appeared in court before him, and by jurors who served in trials over which he presided. Attorneys rated judges in 16 separate categories on a scale of 1 to 5, with 5 being the best rating. The attorney ratings for Judge O’Malley included: 4.5 on maintaining and requiring proper order and decorum in the courtroom; 4.54 on competency in the law, 4.53 on understanding the rules of procedure and evidence, 4.31 on effectively using pretrial procedure to narrow and define the issues; 4.36 on displaying fairness and impartiality toward each side of the case; and 4.33 on basing decisions on evidence and arguments.