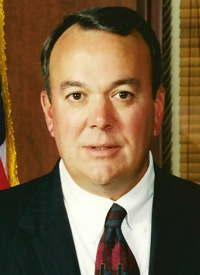 Judge Norris received his Bachelor of Arts Degree from William Jewell College and his Juris Doctorate from the University of Missouri-Kansas City. He is involved with the Disabled American Veterans Association, the Veterans of Foreign Wars Association, and the American Legion.

Attorneys who responded to survey questions rated Judge Norris on a scale of 1-5, with 1 representing “not at all” and 5 representing “completely.” Judge Norris received his high scores for maintaining and requiring proper order and decorum in the courtroom (4.62); treating people equally regardless of race, gender, ethnicity, economic status or any other factor (4.49); understanding the rules of procedure in evidence (4.46); and allowing parties latitude to present their arguments (4.45). Judge Norris’ lower scores were for basing decisions on evidence and arguments (4.42); weighing all evidence fairly and impartially before rendering a decision (4.42); clearly explaining all oral decisions (4.39); demonstrating appropriate demeanor on the bench (4.38); and competency in the law (4.37).

The committee did observe Judge Norris as he conducted public hearings. The observations of Judge Norris by the committee members were taken into account in the making of the recommendation set out below.