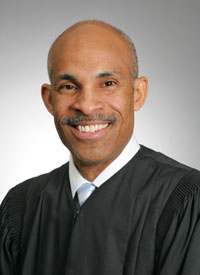 Judge Thomas H. Newton has served on the Missouri Court of Appeals for the Western District of Missouri since 1999. Prior to being appointed to the Court of Appeals, Judge Newton served as a circuit court judge in Jackson County for seven years.

He graduated with his J.D. from Howard University in Washington, D.C. in 1977. He is a member of The Missouri Bar, the Jackson County Bar, the Kansas City Metropolitan Bar Association and the National Bar Association.

On The Missouri Bar’s 2012 Appellate Court Evaluation Survey, attorneys who responded to survey questions rated Judge Newton on a scale of 1 to 5, with 1 representing “not at all” and 5 representing “completely.” Out of a possible top ranking of 5, Judge Newton had no individual category receiving a score below 4.14, representing overall very high scores. The committee reviewed several opinions written by Judge Newton. They involved issues such as construction and interpretation of statutes; review of the findings of administrative departments; and matters of family law. All of the opinions written by Judge Newton appeared well-reasoned and consistent with established case law. The opinions clearly discussed the underlying facts of the case, and applied them to the law.