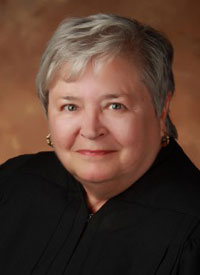 Judge Margaret M. Neill began service as a circuit judge for the 22nd Judicial Circuit on March 1, 1993, and has been retained for three additional terms in 1994, 2000 and 2006. She is a graduate of Visitation Academy, where she has served on the Lay Board, the Council of Trustees and the executive committee from 2004 until 2011. She obtained her undergraduate degree from St. Louis University with a B.A. in psychology. Her J.D. is also from St. Louis University, received in 1981. She has also received a master’s degree in education from the University of Notre Dame in Belmont, California.She is a member of St. Mary Margaret of Scotland Catholic Parish in south St. Louis and the Shaw Neighborhood Improvement Association. She has served as the presiding judge of the 22nd Judicial Circuit. Judge Neill is a member of The Missouri Bar, the Bar Association of Metropolitan St. Louis, Lawyers Association of St. Louis (which she has served as president), the Circuit Judges Association (which she has also served as president), and the National Conference of Metropolitan Courts (former president). She has also served on the faculty of the Judicial Education Committee. Between 1981 and 1993, she was in private practice and tried approximately 50 jury trials.

The committee reviewed survey responses from attorneys who have appeared before Judge Neill and responded to questions rating her on a scale of 1 to 5, with 1 representing “not at all” and 5 representing “completely.” To each of 18 separate questions dealing with all aspects of judicial performance, Judge Neill received average rating scores above 4 on all questions, with her highest average rating scores for demonstrating appropriate demeanor on the bench (4.54) and treating people equally regardless of race, gender, ethnicity, economic status or any other factor (4.47). Her lower average rating scores were for displaying fairness and impartiality toward each side of the case (4.08) and basing decisions on evidence and arguments (4.09).Judge Neill’s peers also completed a survey with questions identical to those on the attorney survey. The peer review surveys yielded an overall average score of 4.66.The committee also reviewed survey responses from jurors who served in Judge Neill’s court. Those jurors were asked a series of 10 questions attesting to Judge Neill’s service. Of those 10 questions, she was given 100 percent positive ratings on seven of the 10 questions, 99 percent positive ratings on two of the questions, and a 92.9 percent positive rating on the tenth question.The committee has also reviewed three written opinions submitted by Judge Neill that dealt with numerous issues of state and federal law, and found that the opinions were well reasoned, clearly written and faithful to state and federal precedents and the Missouri constitution, and that she exercised her judicial discretion in an appropriate manner.