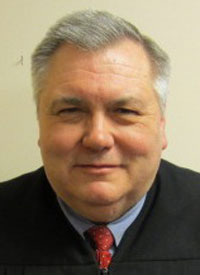 Judge Thomas E. Mountjoy is a circuit judge in Division 4 of the 31st Judicial Circuit. He received a Bachelor of Science degree magna cum laude in criminal justice administration from Central Missouri State University in 1974 and his J.D. with distinction from the University of Missouri-Kansas City School of Law in 1977. He served as the prosecuting attorney for Greene County from January 1, 1983 until February 8, 1996. He was appointed to his current judicial position by the governor in 1996 and subsequently elected in 1996. He was reelected in 2000 and 2006. He has been the presiding judge for the 31st Circuit since 2010.Judge Mountjoy is a member of the board of directors of the Springfield Metropolitan Bar Association, on the executive committee for Presiding Judges for the State of Missouri, and past president of the Missouri Association of Prosecuting Attorneys. He was the co-founder of the Child Advocacy Center of Southwest Missouri, founder of Victim/Witness Services, Humanitarian of the Year for the creation of Greene County’s Teen Court, and is an adjunct professor of criminal justice/criminology at Drury University.

Attorneys who responded to survey questions rated Judge Mountjoy on a scale of 1-5, with a 1 representing “not at all” and 5 representing “completely.” He received his highest scores for: demonstrating appropriate demeanor on the bench (4.54); treating people equally regardless of race, gender, ethnicity, economic status or any other factor (4.51); and maintaining proper order and decorum in the courtroom (4.51). Judge Mountjoy’s lower scores were for efficiently managing his docket (3.84) and issuing timely opinions/decisions (3.48).The survey responses of other judges of the 31st Judicial Circuit rated Judge Mountjoy a 5.00 in 12 categories. He received a 3.50 for efficiently managing his docket and a 3.00 for issuing timely opinions/decisions.The committee also reviewed survey responses submitted by jurors who were seated in jury trials before Judge Mountjoy. Judge Mountjoy received unanimously favorable responses from jurors on questions relating to 10 separate criteria regarding his conduct throughout the jury trials.The committee also reviewed a written opinion submitted by Judge Mountjoy in connection with a judgment he entered in a non-jury trial case, and participated in a courtroom observance of routine hearings.