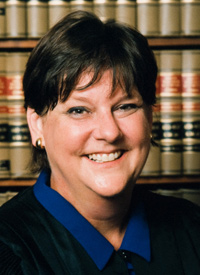 Judge Midkiff was appointed circuit judge for the 16th Judicial Circuit in March 2002. She holds a Bachelor of Arts degree from Knox College in Galesburg, Illinois. She received her law degree from the University of Missouri at Kansas City.

Judge Midkiff also volunteers preparing and serving meals for clients of Holy Family Catholic Worker House and served as music director for a production of “Stations” at Theater at Vis.

Attorneys who responded to survey questions rated Judge Midkiff on a scale of 1 to 5, with 1 representing a response of “not at all,” and 5 representing “completely.” She received her highest scores for: allows parties latitude to present their arguments (4.45); treats people equally regardless of race, gender, ethnicity (etc.) (4.39); and maintains and requires order and decorum in the courtroom (4.38). She received her lower scores for: not affected by partisan considerations (4.12); bases decisions on evidence and arguments (4.18); displays fairness and impartiality toward each side of the case (4.19); and weighs all evidence fairly and impartially before rendering a decision (4.19). However, the committee notes that Judge Midkiff’s lower scores were far above the average for retention.

The committee also reviewed juror responses to surveys, with the comments found to be 98.75 percent favorable. The committee noted comments such as, “Judge Sandra C. Midkiff renewed my faith in the judicial system,” “She was awesome,” and “Most impressed with Judge Midkiff.”

The committee also reviewed three written orders submitted by Judge Midkiff that dealt with issues of substantive law applied to evidence, pleadings and procedural matters often encountered by trial judges. The committee finds the orders to be well reasoned and clearly written.