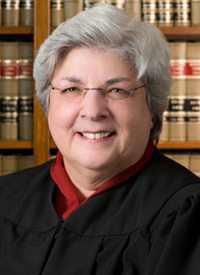 Judge Messina was appointed to the Jackson County Circuit Court (16th Judicial Circuit) in October 1984. She holds a Bachelor of Arts degree in English from Avila University, and received her law degree from the University of Missouri-Kansas City.

Since her last retention election, she has handled civil, criminal, and domestic dockets.

Attorneys who responded to survey questions rated Judge Messina on a scale of 1 to 5, with 1 representing a response of “not at all” and 5 representing “completely.”

She received her highest scores for: maintaining and requiring proper order and decorum in the courtroom (4.59); demonstrating appropriate demeanor on the bench (4.53); and treating people equally regardless of race, gender, ethnicity, economic status, or any other factor (4.52). Judge Messina’s lower scores were for competence in the law (4.21) and stating reasons and consistently applying the substantive law in rulings on dispositive motions (4.23). However, the committee notes that Judge Messina’s lower scores were far above the average for retention.

A public comment was submitted noting that it was a pleasure to be in Judge Messina’s courtroom.