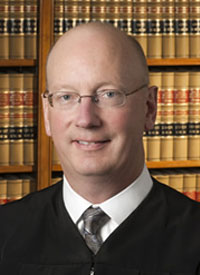 Judge Charles H. McKenzie was appointed circuit judge for the 16th Judicial Circuit in July 2011. He holds a Bachelor of Arts degree in business administration from Cardinal Newman College. He received his law degree from the University of Missouri at Kansas City.Judge McKenzie is a former Jackson County assistant prosecuting attorney and was a member of the Child Abuse and Neglect Review Board. He is a member of the Missouri and Kansas Bar associations, the Kansas City Metropolitan Bar Association, and the UMKC School of Law Inns of Court program.Judge McKenzie is a member of St. Thomas More Catholic Church and volunteers as head football coach, head basketball coach, and basketball coordinator for the St. Thomas More Grade School.

Attorneys who responded to survey questions rated Judge McKenzie on a scale of 1 to 5, with 1 representing a response of “not at all” and 5 representing “completely.” He received his highest scores for: understands rules of procedure and evidence (4.63); is prepared for hearings and trials (4.63); and maintains and requires proper order and decorum in the courtroom (4.61). He received his lower scores for: issues timely opinions/decisions (4.41); written opinions and orders are clear (4.38); and effectively uses pretrial procedure to narrow and define issues (4.38). However, the committee notes that Judge McKenzie’s lower scores were well above the average for retention. In addition, fellow judges rated Judge McKenzie at “5″ in all respects.The committee also reviewed juror responses to surveys and the comments were found to be 99.7 percent favorable. The committee noted comments such as, “Very thorough, treated both sides fairly,” “Very fair and patient,” and “The BEST judge I’ve ever met!”The committee also reviewed three written orders submitted by Judge McKenzie that dealt with issues of substantive law applied to evidence, pleading and procedural matters often encountered by trial judges. The committee finds the orders to be well-reasoned and clearly written.