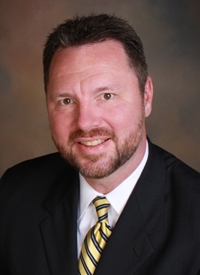 Judge Christopher E. McGraugh was appointed as an associate circuit judge for the 22nd Judicial Circuit on November 8, 2012. He received both his undergraduate and law degrees from Saint Louis University.

Judge McGraugh has served both in Division 27 of the associate circuit court (Civil Assignment Division) and Division 29 (Civil Jury Trial Division). He is a member of The Missouri Bar, the Bar Association of Metropolitan St. Louis, the Women Lawyers Association of Greater St. Louis, the Mound City Bar Association, and the Missouri Association of Probate and Associate Judges. He is also an adjunct professor of law at Saint Louis University School of Law and Washington University School of Law, where he teaches trial advocacy and advance trial advocacy.

He is a parishioner of St. Gabriel the Archangel Catholic Church in South St. Louis, class representative for the DeSmet Jesuit High School Alumni Association, and a member of the Father’s Club of Nerinx Hall High School.

The committee reviewed survey responses submitted by at least 39 attorneys who have had trials before Judge McGraugh and rated him on a scale of 1 to 5, with 1 representing “Strongly Disagree” and 5 representing “Strongly Agree.” Lawyers who responded to the survey questions gave Judge McGraugh his highest scores for: addressing individuals (e.g., attorneys, court staff, litigants, public witnesses) respectfully in the courtroom (4.75); maintaining a professional demeanor in the courtroom (4.72); and being prepared for court (4.69). Judge McGraugh’s lower scores were for: rulings cited the applicable substantive law (4.35); his decision followed logically from the evidence presented (4.37); and he assisted parties in narrowing key issues in dispute (4.43).

The committee was not presented with any juror surveys pertaining to Judge McGraugh.

Five court staff members who served in Judge McGraugh’s courtroom also completed a survey in regard to Judge McGraugh. All five were very praiseworthy of the judge. He was particularly cited for being early, prompt, listening well to all of the trial staff, and very respectful of everyone involved in the court proceedings. Each court staff member gave him the highest marks in all of the 15 areas in which they were surveyed.

The committee also reviewed written opinions by Judge McGraugh. His opinions were well reasoned, with easy-to-follow explanations, competent in the law, and adhered closely to precedent as well as the constitution and statutory law. The precedents were cited and clearly explained.