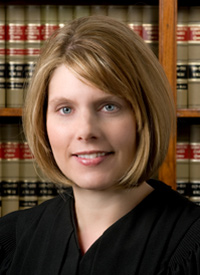 Judge May was appointed circuit judge for the 16th Judicial Circuit in 2009. She holds a Bachelor of Science degree in English communications from William Woods College, and received her law degree from the University of Missouri at Kansas City.

She is involved with the Ross T. Roberts Inns of Court Program in Kansas City. She is an active member of The Missouri Bar, the Kansas City Metropolitan Bar Association, and the Association of Circuit Court Judges.

Attorneys who responded to survey questions rated Judge May on a scale of 1 to 5, with 1 representing a response of “not at all,” and 5 representing “completely.”

She received her highest scores for: treating people equally regardless of race, gender, ethnicity, economic status, or any other factor (4.62); and maintaining and requiring proper order and decorum in the courtroom (4.65). Judge May’s lower scores were for: competency in the law (4.12); and understanding rules of procedure and evidence (4.15). However, the committee notes that Judge May’s lower scores were far above the average for retention.

The committee also reviewed survey responses submitted by jurors who were seated in jury trials before Judge May. Judge May received unanimously favorable responses from the jurors on questions relating to 10 separate criteria regarding her conduct throughout the jury trials.

The committee has reviewed a written opinion submitted by Judge May which dealt with issues related to public access to court records. The committee finds the opinion to be well reasoned, succinct and clearly written.