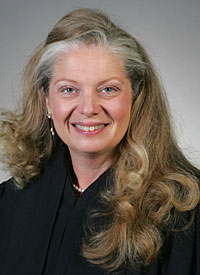 Judge Cynthia L. Martin was appointed to the Missouri Court of Appeals – Western District on October 13, 2009 and began her service on the bench on November 9, 2009. Prior to being appointed to the Court of Appeals, Judge Martin was in private practice since 1984. Judge Martin earned her Bachelor of Arts degrees in psychology and communications, summa cum laude, from William Jewell College in 1981 and her J.D. degree from the University of Missouri-Kansas City in 1984, where she was honored for Order of the Bench and Robe, and served on the UMKC Law Review staff. Judge Martin’s professional legal affiliations include being a member of the board of trustees of the National Conference of Bar Examiners, member of the Kansas City Metropolitan Bar Association (past president), member of the Association for Women Lawyers, member of the Missouri Board of Law Examiners, 2001-2011 (served as president in 2009 and 2010), and chair of the Missouri Supreme Court’s Ad Hoc Committee to Study Discovery and Use of Electronically Stored Material, 2010-2011. Judge Martin is a member of The Missouri Bar, the Kansas City Metropolitan Bar Foundation, the Association for Women Lawyers, and the National Association of Women Judges. Judge Martin’s civic activities have included her service as a board member of Lee’s Summit Educational Foundation, Southeastern Jackson County Citizens Association, and Lee’s Summit North Music Parents.

On The Missouri Bar’s 2012 Appellate Court Evaluation Survey, attorneys who responded to survey questions rated Judge Martin on a scale of 1 to 5, with 1 representing “not at all” and 5 representing “completely.” Judge Martin received her highest scores for treating parties equally (4.47), being courteous toward attorneys (4.44), issuing opinions in a timely manner (4.43), allowing parties to present their arguments and answers (4.34), making decisions without regard to possible criticism (4.31), and being fair and impartial toward each side of the case (4.30). Judge Martin was not rated below a 4.00 in any category.

The committee reviewed opinions written by Judge Martin. The opinions were detailed, analytical, and clearly-written, with sufficient reference to the underlying facts of the case as well as the relevant legal principles. The opinions appeared to be in accordance with constitutional and statutory law.