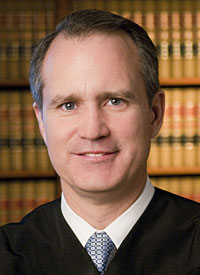 Judge James Kanatzar was appointed circuit judge for the 16th Judicial Circuit in April 2011. He holds a Bachelor of Arts degree from Creighton University in Omaha, Nebraska. He received his law degree from the University of Missouri-Kansas City.Prior to his appointment, Judge Kanatzar served as Jackson County, Missouri Prosecutor. He is a member of The Missouri Bar Board of Governors. He is also a member of the Kansas City Metropolitan, Eastern Jackson County, and Kansas Bar associations.Judge Kanatzar is a past member of the Boys and Girls Club Steering Committee for the JD Wagner Dreams to Reality Campaign, and a past member of the board of directors for the Second Chance Program. He is also involved in Hospitality House, the Cathedral of Immaculate Conception. Judge Kanatzar is also a CYO youth football coach.

Attorneys who responded to survey questions rated Judge Kanatzar on a scale of 1 to 5, with 1 representing a response of “not at all” and 5 representing “completely.” Judge Kanatzar received his highest scores for: maintains and requires proper order and decorum in the courtroom (4.21); and treats people equally regardless of race, gender, ethnicity, economic status, or any other factor (4.17). Judge Kanatzar’s lower scores were for: is competent in the law (3.72); and rulings on dispositive motions state reasons and consistently apply the substantive law (3.72). Judge Kanatzar’s lower scores are above the average for retention.The committee reviewed a peer survey completed by a number of Judge Kanatzar’s fellow judges. Again, the survey rated Judge Kanatzar on a scale of 1 to 5. He received the highest scores for: is not affected by partisan considerations (4.88); is prepared for hearings and trials (4.88); bases decisions on evidence and arguments (4.88); demonstrates appropriate demeanor on the bench (4.88); and maintains and requires proper order and decorum in the courtroom (4.88). Judge Kanatzar’s lower scores were for:issues timely opinions/decisions (4.57); and efficiently manages his/her docket (4.63). The committee also reviewed juror responses to surveys, and their written comments. These surveys and comments were found to be 100 percent favorable. Lastly, the committee reviewed written orders and opinions submitted by Judge Kanatzar that dealt with issues of procedural and substantive law often encountered by trial judges. The committee finds these writings to be well-reasoned and clearly written.