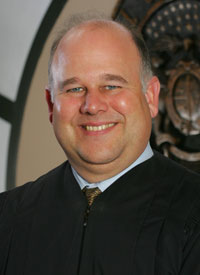 Judge Gary D. Witt is on the ballot for his first retention vote after being appointed to the Court of Appeals for the Western District in February 2010. He formerly served as an associate circuit judge in Platte County, Missouri from 1998-2010. Judge Witt graduated from William Jewel College in 1987 and the University of Missouri School of Law School in 1990. From 1990-98, he was associated in private practice with the firm of Witt, Hicklin & Witt. He also served as the assistant city attorney and prosecuting attorney for four cities in Platte County. During this period of time, Witt also served in the Missouri General Assembly, chairing the Judiciary and Ethics committees.Judge Witt has been active in a wide variety of judicial and civic activities, including memberships and affiliations with the First Baptist Church of Weston, the Platte County Historical Society, the Platte County Fair, and the University of Missouri Alumni Association.He has received a number of award and honors. He was named the “Best Associate Circuit Judge” byMissouri Lawyers Weekly in 2009, one of the “Ten Outstanding Young Missourians from the Missouri Jaycees” in 1993 and a Walter Pope Binns Public Service Fellow of William Jewel College in 1993. He has also received awards from The Missouri Bar and the Missouri Association of Probate and Circuit Judges.

Members of the committee reviewed 20 opinions written by Judge Witt. The opinions appear to be well-written and show good legal and analytical skills. In a survey of lawyers who appeared before him, he received his highest ratings for courtesy and his lowest ratings for making reasoned decisions based upon the facts and law. His marks for all of the various areas were fairly consistent, however, without significant variability.Judge Witt is a dedicated judge and good public servant with a wide variety of experience in the various branches of state and local government.