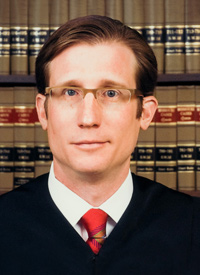 Judge Powell was appointed a circuit judge for the 16th Judicial Court in February 2008. He received a Bachelor of Arts degree from William Jewell College and a law degree from the University of Missouri.

Judge Powell is a parishioner and active member of Visitation Catholic Church, where he is a sponsor and team leader of confirmation class. He is a supporter and volunteer for the Metropolitan Organization to Counter Sexual Assault (MOCSA) and the Child Protection Center (CPC). In addition, he is a board member of Lawyers Encouraging Academic Performance (LEAP).

Attorneys who responded to survey questions rated Judge Powell on a scale of 1 to 5, with 1 representing “not at all” and 5 representing “completely.”

He received his highest scores for: demonstrating appropriate demeanor on the bench and maintaining and requiring proper order and decorum in the courtroom (4.86); and treating people equally regardless of race, gender, ethnicity, economic status or any other factor (4.85). Judge Powell’s lower scores were for: rulings on dispositive motions state reasons and consistently apply the substantive law and effectively using pretrial procedure and evidence (4.66); and is competent in the law (4.7). However, the committee notes that Judge Powell’s lower scores are far above the average for retention.

The committee also reviewed survey responses submitted by jurors who were seated in jury trials before Judge Powell. Judge Powell received an almost unanimously favorable response from the jurors on questions relating to 10 separate criteria regarding his conduct throughout the jury trials.

The committee has reviewed a written opinion submitted by Judge Powell which dealt with numerous issues of criminal law. The committee finds the opinion to be well reasoned and clearly written.

The committee also observed Judge Powell performing his functions on the bench and found him to be efficient. The committee found his demeanor towards litigants, attorneys and staff to be professional and appropriate.