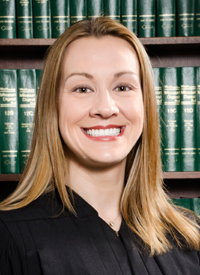 Judge Karen Krauser was appointed associate circuit judge in 2012. She received her Bachelor of Arts degree from Park College (now Park University) and her Juris Doctorate degree from the University of Missouri-Kansas City School of Law.  She has served as municipal judge for the cities of Excelsior Springs and Platte Woods.

She has been actively involved in the continuing legal education program for the bar associations in which she is a member. She has been appointed by the Chief Justice of the Missouri Supreme Court to serve on the Municipal Judicial Education Committee, the purpose of which is to educate new elected or appointed municipal judge.

Attorneys responded to survey questions asking if they agreed with 19 statements about Judge Krauser and rated Judge Krauser on a scale of 1 to 5, with 1 representing “strongly disagree” and 5 representing “strongly agree.” Among the lawyers who evaluated Judge Krauser, 29 percent of them had between one and five cases before Judge Krauser; 15 percent had six to 10 cases; and 56 percent had 10 or more cases. Those lawyers who had cases that went to trial and had a decision entered during the judge’s current term of office were made up of 80 percent of lawyers with one to five cases before Judge Krauser; 10 percent with six to 10 cases; and 10 percent with more than 10 cases that went to trial. Of the lawyers who evaluated Judge Krauser, 44 percent said the judge ruled primarily in the reviewing lawyer’s favor; 39 percent said she ruled equally in favor of and against the evaluating attorney’s party; five percent said she ruled primarily against the evaluating attorney’s party; and 12 percent did not have any applicable ruling in the cases before Judge Krauser.

Lawyers reviewing Judge Krauser gave her high scores for starting courtroom proceedings on time (4.37); allowing the appropriate time for each case (4.30); considering the amount of case law required to render a prompt decision (4.31); listening carefully during the court proceedings (4.25); and adhering to the appropriate rules of procedure (4.21).

Judge Krauser’s lower scores were given for given for applying the rules of evidence relevant to the case (4.05); making a decision which logically follows from the evidence presented (4.03); making sure all parties (attorneys and their clients) understood the court proceedings (3.90); citing the applicable substantive law (3.79) and assisting the parties in narrowing key issues in the dispute (3.62).

The Committee also received survey responses from jurors who had participated in a jury trial before Judge Krauser. The committee analyzed the results of the juror survey and determined that the questions were answered in the affirmative in every instance but one.

The committee also received and reviewed two opinions written by Judge Krauser. The committee found the opinions to be clear, concise and well written.