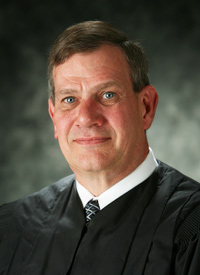 Before his appointment to the court, Judge Van Amburg spent 11 years in the private practice of law. He served as an assistant prosecuting attorney in Platte County from 1987 through 1993. He is a member of The Missouri Bar, the Missouri Probate and Associate Circuit Judges Association, the Missouri Municipal and Associate Circuit Judges Association, and the Platte County Bar Association. He served as a member of the West Platte R-II School District Board of Education from 1986 through 1992. His community interests include serving as a presenter to the Kansas City Metropolitan Bar Association, Synergy Services Training Program, Siegrist Elementary School in the Platte County R-III School District and the American Legion Post for the West Platte R-II School District. He also serves annually as a volunteer for the Weston Applefest.

As to the strengths of Judge Van Amburg, the committee would emphasize that Judge Van Amburg, while hearing cases involving significant conflict and tension – for example, dissolution of marriage, domestic violence, mental health, and incapacity and disability proceedings – has exemplified a high degree of professionalism and courtesy to all present before the court. With patience and practical understanding, Judge Van Amburg has sought to bring about a respect for the court and, most importantly, for the law.

Jurors who responded to survey questions gave Judge Van Amburg a perfect rating in all categories, including acting with patience and dignity, clearly explaining court procedure, legal issues and the responsibilities of the jury, maintaining control over the courtroom, and being well prepared for the case.

Attorneys who responded to survey questions rated Judge Van Amburg as exceeding expectations in all respects, including: (1) treating people equally regardless of race, gender, ethnicity, economic status or any other factor; (2) displaying fairness and impartiality toward each side of the case; (3) not being affected by partisan considerations; (4) being prepared for hearings and trials; (5) allowing parties latitude to present their arguments; (6) basing decisions on evidence and arguments; (7) giving reasons for rulings; (8) demonstrating appropriate demeanor on the bench; (9) maintaining and requiring proper order and decorum in the courtroom; (10) being competent in the law; (11) stating reasons for his rulings on dispositive motions and consistently applying the substantive law; (12) effectively using pretrial procedure to narrow and define the issues; (13) understanding rules of procedure and evidence; (14) weighing all evidence fairly and impartially before rendering a decision; (15) writing clear opinions and orders; (16) clearly explaining all oral decisions; (17) efficiently managing his docket; and (18) issuing his decisions in a timely fashion.

The committee also reviewed opinions that Judge Van Amburg wrote. His opinions appear to be well reasoned and clearly written, and they appear to fulfill all of the necessary legal requirements.

The Committee members have not noted any weaknesses in the judge’s performance of his duties.