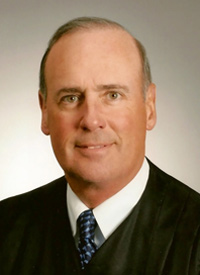 Judge Howard has served as chairman of the Youth Friends Advisory Board and on the board of Adult and Community Education Advisory Committee and the Domestic Violence Community Response Team. He has also served as a member of the Tri-County Mental Health Supportive Employment Task Force and Kansas City Consensus Leadership Task Force.

On the Missouri Bar’s 2010 Appellate Court Evaluation Survey, attorneys who responded to survey questions rated Judge Howard on a scale of 1 to 5, with 1 representing “not at all” and 5 representing “completely.”

Judge Howard received his highest scores for being courteous toward attorneys (4.69), treating parties equally (4.62), allowing parties to present their arguments and answers (4.61) and being fair and impartial toward each side of the case (4.5). Judge Howard was not rated below a 4.00 in any category.

The committee reviewed opinions authored by Judge Howard. The opinions appeared to be in accordance with constitutional and statutory law. The opinions were clearly written, with sufficient reference to the underlying facts of the case as well as the relevant legal principles.