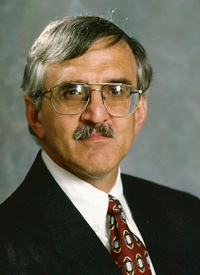 Judge Frawley was appointed to the 22nd Circuit Court in 1991. He graduated from Hamilton College (Clinton, New York) and received his law degree from the University of Missouri School of law. While in law school, he served on the Missouri Law Review.

Judge Frawley has served as a circuit judge in the 22nd Judicial Circuit for 18 years, 17 of which have been in Family Court. He served as administrative judge of the Family Court between 1998 and 2008. He served as chair of the Family Court Committee of the Missouri Supreme Court from 1995 until 2005. In January 2007, Judge Frawley was appointed by Governor Matt Blunt and confirmed by the Missouri Senate for a three-year term on the Coordinating Board for Early Childhood, State of Missouri.

He currently serves on the National Advisory Board of the National Quality Improvement Center on Differential Response in Child Protective Services, which is a five-year project through the American Humane Association and funded by the United States Department of Health and Human Services, Administration for Children, Youth and Families.

Attorneys who responded to survey questions rated Judge Frawley on a scale of 1 to 5, with 1 representing “not at all” and 5 representing “completely.” He received his highest scores for: being prepared for hearings and trials (4.55); efficiently managing his docket (4.46); issuing timely opinions/ decisions (4.43); and treating people equally regardless of their race, gender, ethnicity, economic status, or any other factor (4.43). Judge Frawley’s lower scores were for: demonstrating appropriate demeanor on the bench (3.92); allowing parties latitude to present their arguments (3.98); displaying fairness and impartiality towards each side of a case (4.11); and weighing all evidence fairly and impartially before rendering a decision (4.14).

The committee also reviewed survey responses submitted by jurors who were seated in jury trials before Judge Frawley. Judge Frawley never received an approval rating below 98 percent on any of the 10 categories on which he was rated regarding his conduct throughout the jury trials.

The committee also reviewed written opinions by Judge Frawley. His opinions were well-reasoned, with easy-to-follow explanations, competent in the law, and adhered closely to precedent as well as to constitutional and statutory law.