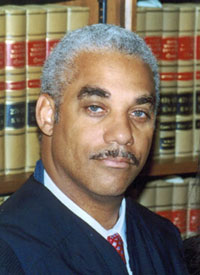 Judge Draper is one of the few judges who has served at every level of Missouri’s current court system. Prior to serving as a judge, he worked as a prosecuting attorney in the City of St. Louis from 1984-1994. Judge Draper earned his bachelor’s degree in psychology from Morehouse College in 1977 and his J.D. degree in 1981 from Howard University School of Law. After graduation, he served as law clerk to Judge Shellie Bowers in the Superior Court of the District of Columbia.

Judge Draper has volunteered with the INROADS program, which prepares underserved youth for business and community leadership positions. He counsels students interested in legal careers and has served as a mentor to attorneys deferred from practicing.

On The Missouri Bar’s 2012 Appellate Court Evaluation Survey, attorneys who responded to survey questions rated Judge Draper on a scale of 1 to 5, with 1 representing “not at all” and 5 representing “completely.” Judge Draper received his highest scores for being courteous toward attorneys (4.42), allowing parties to present their arguments and answers (4.34), treating parties equally (4.31), and issuing opinions in a timely manner (4.24). Judge Draper was not rated below a 4.00 in any category.

The committee also reviewed opinions written by Judge Draper. The opinions appeared to be in accordance with constitutional and statutory law. The opinions were well written, with sufficient reference to the underlying facts of the case as well as the relevant legal principles.